Swap your PVC Garden Hose For a ‘Safe Drinking’ Version 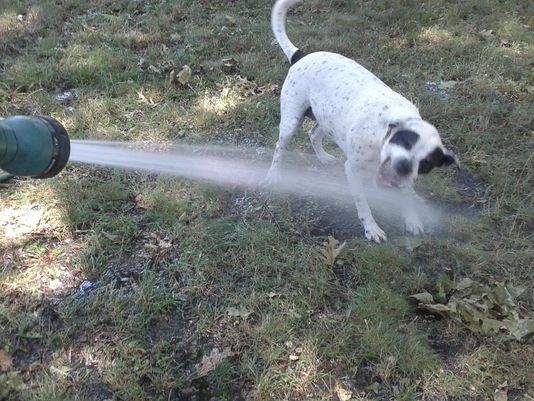 Think twice before you fill the kiddie pool with water from the garden hose this weekend.

Hold off on sprinkling the veggie plants.

And be careful your dog isn’t drinking a chemical cocktail with each gulp from the nozzle.

“We tested a couple of polyurethane hoses that were not labeled drinking water safe and the hose part was great, but a couple of them had somewhat elevated lead in the fittings.”

In a follow-up to its studies in 2011-13, the Ecology Center in Ann Arbor this year tested 32 garden hoses for hazardous metals, bromine, which is used in fire retardants, chlorine and a group of chemicals called phthalates that make plastic flexible, PVC plastic, tin and antimony. It released the study this week.

The hoses came from six major stores. Twenty-four were PVC and the rest were polyurethane and one was synthetic rubber.

Miller said the Center tested the composition of each hose and checked fittings for metals and bromine. Another test looked for chemicals leaching into water that was held for two days in seven different hoses. Samples sent to a certified lab were tested for lead, phthalates and BPA, a chemical found in some plastics.

The Ecology Center found that PVC hoses contained elevated lead, bromine, antimony and phthalate levels, which were not found in polyurethane and rubber hoses. Some of the PVC hoses also contained recycled electronic waste.

“There is no reason for bromine to be in a garden hose. The only reasonable explanation is that it’s from brominated flame retardant, which is very common in electronic waste,” Miller said.

BPA and lead leached into the water in some samples, although they were not found in a hose identified as drinking water safe.

The Ecology Center found a significant drop in the number of hose fittings with high lead levels over the past five years. Forty percent of fittings tested in 2011 contained lead. That number dropped to 15 percent in the current study.

“More of the fittings were aluminum rather than brass. We saw a big difference this year.”

“People often contact us because they are frustrated. They can’t figure out in some product category how to figure out if it’s safe. That’s why our goal really is to change the market.”

Miller said the Ecology Center scientists “de-formulate” products to see what’s in them. Then they publicly disclose their findings, along with brand names. They often reach out to manufacturers and retailers to discuss the data.

“We have a history of engaging with retailers and manufacturers. Sometimes they will seek our advice.”

“We are excited when we see improvement in a product area,” she said.

The Ecology Center suggests that consumers read labels on garden hoses and look for “drinking water safe” before buying.

Other tips on hoses:

• Buy a PVC-free hose, such as polyurethane or rubber, which are less likely to include potentially hazardous chemicals.

• Avoid hoses with the California Prop 65 warning that says “this product contains a chemical known to the State of California to cause cancer and birth defects and other reproductive harm.”

• Run your hose for five seconds before using it.

• Store your hose in the shade.

• Don’t drink water from a garden hose unless you know that it is phthalate-free and drinking water safe.